Well, actually, not Halloween, but all that banging and booming that goes on when the neighbours all go loopy and play with matches, fire and explosive devices, and then expect their children not to incinerate themselves for the sake of entertainment at any other time of the year. 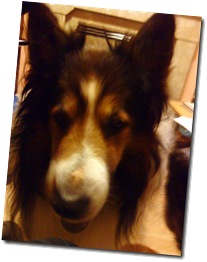 Over the years I’ve had a banger thrown in my face (luckily it bounced back before it exploded), and one at Timmie (aged about 6 months… his fur was scorched and he actually collapsed with the shock) that happened three nights before the main event.  In the following years he barked his way through every Halloween literally from dusk till dawn.  I’ve spent nights sitting on the upstairs landing with him, with all doors closed and the radio going full blast to prevent him hearing the noise, I’ve given him tranquilisers. I’ve walked him till he dropped and then stuffed him with food to make him too sleepy to care.  He’s ended up with a version of dog laryngitis from barking to much, and a fever from being so terrified. Nothing worked. 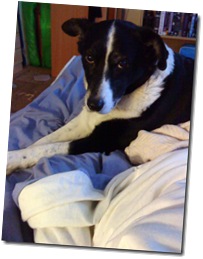 Then Chloe came along and decided to take her cues from Timmie.  Double chaos. Chloe isn’t as terrified as Timmie, but she is damn well going to make sure everybody knows how much she objects to his discomfort. She’s very supportive that way.  Timmie’s bark is monotonous, starting in the early evening with that collie high pitched yip and descending to what sounds like a country and western singer with emphysema after a couple of hours. Chloe, on the other hand, works in timed volleys so she does not run out of steam.  Her pitch is a combination of a railway whistle and a pneumatic drill and she likes to throw in a liberal amount of thundering up and down the stairs.

Timmie is an elderly dog and over the last few years his hearing has deteriorated.  Halloween 2006 and 2007 were progressively more peaceful.  Because Timmie didn’t really notice the fireworks anymore (unless there was a really big explosion, close by), Chloe wasn’t bothered. Halloween 2008 was the first time in 14 years when he snoozed the whole night through… Luckily Chloe has been on a diet for the last couple of years, so now it is pretty easy to distract her with “illegal” treats.  She probably has Halloween marked on her calendar. 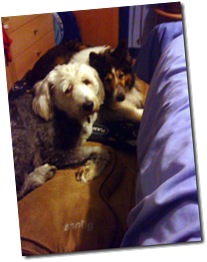 2009 rolled up and Izzy landed in our household that March.  I’ve written a little about her background, she was a very nervous dog when she came into our lives, and although she has recovered a great deal, it doesn’t take much to turn her into a quivering wreck.  Last year she spent the night huddled on a cushion in the corner, and by the time I managed to extract her, the cushion was a sodden mess because she had been unable to stop peeing with fright.  This year was a little better because she has now established a very close relationship with Timmie, and she spent most of the night cuddled up beside him.  If you look closely at this picture, you will see that she has her left front paw planted firmly on top of his right paw. She managed not to create any major floods, but my mop is demanding overtime. I’m also wondering will she ever venture out into the back yard again.

I know this is a forlorn hope, but if firework lovers out there reading this could give a little thought to the animals (and their long-suffering owners) in the neighbourhood round Halloween, I’d really appreciate it.

NB… we are NOT looking forward to New Year’s Eve. 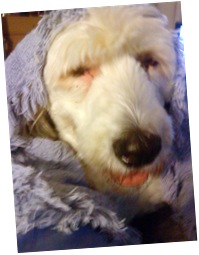 Izzy tends to be the most photographed girl in this house, mainly because she loves the camera and it loves her right back.

Here she is with her blue blanky which she has lately taken to dragging round the house with her looking for the best spot to lie in everybody’s way.