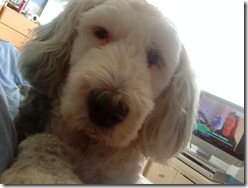 I finally bit the bullet today and let Izzy off-lead outside the garden,  You might remember that Izzy arrived in my life because she used to be in inveterate runaway and had actually done time in the pound twice.  The first time I took her to the park I made the mistake of using one of those godawful extending leads with the big handles.  Because I had two other dogs to deal with I couldn’t get a good grip on it quickly enough when she hopped out of the car, and the resulting clatter of the handle hitting the ground when it jerked out of my hand sent her running off, away from the sound of the clattering handle which of course kept following her.  Pretty much a disaster all round, but thankfully, I was able to catch her.

Since then I have used a double ended training lead which I would clip to a belt loop on my jeans or hook onto the three dog leads to give her an illusion of freedom. Until the belt loop gave way .…Izzy turned out to be the type of dog that likes to keep going “thataway” at a very high speed. I was beginning to think she would be condemned to a permanent life on the leash until last week when I found out there was an off-leash area in St Anne’s and made a beeline there.  What a let-down!  It turns out to be a miserable square of broken glass encrusted gravel smaller in area than my own back garden, surrounded by a broken glass and condom laden grass verge with a threatening sign outside demanding that the poop be picked up with no sign of a litter bin to deposit said picked-up poop.  Something of a let-down, might I say. But I released her 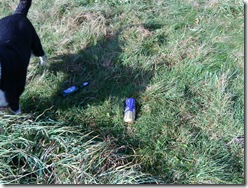 in there for a little while and practised some recall.  She seemed a little bemused, as the area was so small she was only interested in patrolling the perimeter (this was good as there was the least amount of glass there).  However, she did respond to recall so that was a start.  Picture above shows Chloe beside some of the crap we had to negotiate. 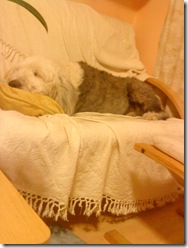 Anyhow, this week I brought the three beasties to one of the rugby pitches that was not in use, as well as half a pound of chicken bits and proceeded to engage in outright bribery which worked like a charm. She took off, I called her and waved the nice smelly meat, and back to me she ran,time and again.  Then I called her back and instead of the meat I just told her how good she was, and that worked too.  An outrageously gorgeous and extremely fast saluki turned up and  against his will, she carefully herded him back to me, much to his owner’s surprise.  I promise, we gave him back!.  So I think finally the  runthataway mentality has begun to recede.  I’m now looking forward to going back to the days of having enough free hands to  brin the SLR to get good action shots of all my honeys having a good time.  Here she is, relaxing after her day out. 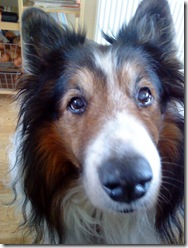 As I mentioned below, it is a good thing to bring a dog to visit the vet from time to time when there isn’t anything obviously wrong.  Firstly the dog gains some confidence that the vet is not their enemy, secondly the human gains some confidence that the dog won’t be upset! Third reason I can think of, but certainly the most important, the vet or nurse may spot something that you haven’t.

Today we had the regular weigh-in for Chloe, see the post below… and Tim and Chloe were both due their shots so I had an opportunity to have a good talk with Neil at Anicare about his (Tim’s!) state of mind.  I wasn’t sure if I’ve been anthropomorphising Tim, but I’ve begun to believe that he is going senile – he wanders into a room and stands there barking until I come and get him… he stands in front of the shed door expecting to get into the house, occasionally he just stands about looking bewildered, his eyesight is not what it was, he seems to indulge in selective deafness, he occasionally cops what can only be deemed a rebellious attitude  and it all reminded me of my mum when she hit her eighties..  and true enough it turns out that dogs these days live long enough to become senile.  However, Neil could assure me he is surprisingly good health for an old dog.  On the other hand, he did notice an abcessed tooth which is treatable with antibiotics  - I hadn’t spotted it and the poor old boy could have ended up in quite a bit of pain if it had gone on much longer. So thanks Neil!. After the vet viisit he bounced around St. Anne’s Park with the girls, attempted a courtship with a nice collie cross , did his best to dominate an extremely large and thankfully patient male labrador and followed that with a little gentle volleyball in the back yard.  Fingers crossed it stays that way, 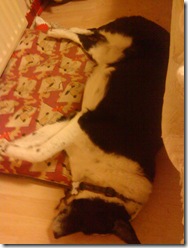 Well, we went to see Auntie Victoria today and lo and  behold, Chloe is at the top of her class again!  She has lost 4 (count that!  4!!!! ) kilos since last weigh in. Since she was last measured she has lost 3 cm from her neck and 5 cm from her waist!  Chloe was so pleased she couldn’t bear to get off the scales and when first Timmy and then Izzy got weighed, she tried to join in.  She got so much praise she almost didn’t notice that she also got her annual shots.

I know it isn’t really vital to have a visit to the vet’s office to check her progress, because I can see how well she is doing, but it really does work out to bring a dog to the vet’s office when nothing is actually wrong and no shots are due. All three of my beasties are now completely relaxed when they attend so when it is a really necessary visit, such as today when both Tim and Chloe were due their innoculations it was not half as stressful for them.